I don’t remember my first trip to the San Juan Islands. As kids we loved riding the Washington State Ferries, so I’m sure my family took the ferry to Friday Harbor as a day trip. The islands became a destination for me after I met Spouse.  Spouse’s friend Ed had access to his 26-foot family boat and they would do fishing trips around Puget Sound, off of Port Townsend, and through the San Juan Islands. The islands hooked spouse and he easily reeled me in as well.

The San Juan Islands, clustered between northwest Washington and British Columbia’s Vancouver Island, experienced some notoriety as disputed territory between the U.S. and Britain. In the 1850’s, a skirmish involving the shooting of a rogue pig resulted in a significant military build-up on both sides, even threatening  war, but the smooth talking of General Winfield Scott quieted the need for shooting. The military presence remained strong for almost 30 more years, until the issue of ownership, settled by Kaiser Wilhelm I of Germany, kept the islands as part of what would become Washington State. The seclusion and myriad bays, coves, and difficult-to-navigate channels of the islands made passage through them a favorite route for smugglers, bootleggers, and many other ill-sorted folk. These days the islands are rife with vacationers, second-home owners, retirees, city escapees, and my favorite: small farms & small bakeries, fishers, potters, builders & craftspeople, all usually living simply so they can live & work among these magical islands.

Throughout our many years together, Spouse and I have boated to and around the islands, we’ve camped on several of them, we stayed at B&B’s, and we’ve taken day trips. We’ve fished, hiked, explored, skipped rocks, cooked, ate, birded, rode scooters, read and relaxed. The hour + ferry ride from Anacortes to Friday Harbor alters time. The further the dock recedes into the wake, the more of everyday sloughs off. Experts at the micro-vacation, when Jr was still backpackable size we’d ferry to Orcas for the day so we could hike around Mountain Lake, returning home late. People thought we were nuts, but little trips like this would refresh us, feeling, upon our arrival home, that we’d been gone for weeks.

As time flies, my last visit was early September.  This trip was my choice; no theme parks or huge hotels, just hilly land & the watery straits. I booked the trip in early April when suffocating under the weight of  busy. Too many classes, too many recipes, too much paperwork & schoolwork & research to do. I couldn’t find time for my soul: writing, reading Buechner or Fisher or , walking somewhere other than my neighborhood, being outside, just being, enough. A dear friend had suggested that I do those “me” things first, before I start the busy of the day. I did try but my tangential self couldn’t maintain this pattern to develop into a new habit. (I am still working on this transition!) So I planned a few-day escape. 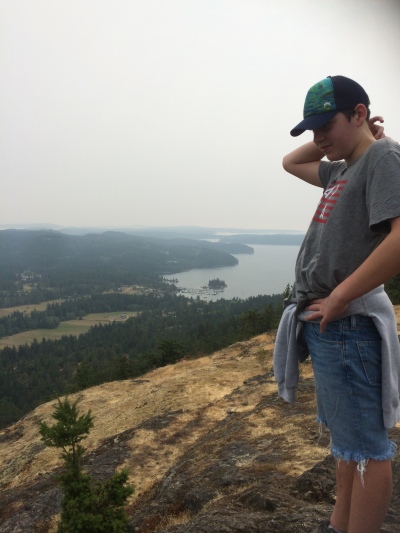 We’d stay in an Airbnb-small, charming, private, boasting a L2 EV charger on Orcas Island. There’d be no swimming pool or the usual attractions, so Spouse & JR planned an afternoon of charter fishing. I’d get that time COMPLETELY to myself. I was giddy. As our trip approached, the Washington weather had taken an ugly turn: we were living with constant stagnant air, polluted by forest fires in southern Canada and eastern Washington. The reports included the San Juans but because of all that affects flow, it was on the cusp. We wouldn’t have great views but wouldn’t have visible ash dotting our car either.

The trip was everything I needed it to be. We hiked and explored, though no fish caught, I spent time reading & writing. I found beautiful bread, we gobbled up host-caught Dungeness Crab, enjoyed the soaking tub and/or outdoor shower. We experienced what I think to be the biggest gamut of restaurants: rock & roll blaring super chatty sole proprietor Mexicanish lunch to a farm-to-table outdoor pizza dinner, which while delicious had a high level of  (hipster?) pretension: on deciding what would be a good fit for Jr, we asked for clarification regarding the pizza described as having “tomato, fresh cheese and herbs”. Though they were very specific noting items that came with a “hen’s egg”,  taken aback, the server explained our choice meant red sauce, mozzarella & basil. Geesh. Whatever. I laughed about it and do wish them success. Restaurants have a tough go with such seasonal fluxes of customers.

There was a time when Spouse & I thought we’d move to the islands. Specifically Stuart. I was still elementary teaching and the lure of the then operational one-room school was strong. But as often happens, the path we were walking took a bend away from those plans. While they may return in the future, for now it is enough to visit and how lucky for us that we can. As a benediction, I wish you all a place, close enough to reach when needed, where you can let the regular everyday fall away, let the busy stop, let the chatter silence, for a bit. We’ll all be better, more whole, for it.