Just sit right back and you’ll hear a tale…

Gilligan’s Island. I can name that tune in 4 notes. Much of our experience at Trail’s End felt very much like being castaways on a remote deserted island.

No phone, no lights no motor cars,
Not a single luxury,
Like Robinson Crusoe,
As primitive as can be.

We had found a water source. One of the paradoxes of my childhood, was my ancient maternal Grandfather: a no-nonsense, strict, conservative, religious hard-working Swedish immigrant. While he wouldn’t prune an apple tree on Sunday, he could find water through divining. Grandpa came to our property and witched for water. Using a fresh-cut vine maple branch, he located the spot that would indeed produce water for our home. I found this funny and ironic. Growing up with strong direction away from magic and sorcerery, here was my Granddad using ‘magic’ to find water. But, I digress.

The first seemingly insurmountable hurdle we met was that of electricity. Our driveway now installed, the 60 foot required easement producing an Interstate 90-ish kind of access, brought the distance from power poll at street to that of home site to 1/2 mile. We were to pay for electricity installation by the foot. I don’t remember the exact numbers, but for us, getting electricity to the home site would be in excess of $30,000. Ouch. The other residents on the shared part of our driveway had opted for alternative means of powering their homes, either due to prohibitive cost or wanting to live outside the system. We had very limited funds so began to look into alternatives. Six 2-volt retired phone company deep cell batteries, 4 solar panels, a roof mounting rack, lots of 12 to 14 gauge wire, a control panel, and 1 Honda generator later, we were set. We became part of a very small group of subscribers to Home Power Magazine, a resource for alternative electricity advocates, launched in 1987. Spouse, always interested in things electrical, became an expert in amps, volts, ohms, usage, and trickle charge. Our system would run a well-pump, but we couldn’t afford enough panels to power a Sun Frost refrigerator, so we opted for self-hauled propane for heating water and storing food. We would be cooking on a wood-fueled cookstove. We had unwittingly established ourselves as family conversation pieces.

Limited finances pushed our decision regarding shelter as well. A structure deemed safe to occupy by county officials must be built on a poured cement foundation. We didn’t have funds for both a poured foundation AND a structure to set on it, so we opted for the structure. Our plan was small, smaller than the former milk shed we had been living in, and it would rest on a post and pier foundation. By making this choice, we were choosing to operate outside of the system, choosing to live in an unauthorized building. We would build a safe, sound, strong structure, working with our builder-friend-turned-mortgage-holder, Jay. Under normal development scenarios, workers install the septic system before house construction begins. Here I was adamant: if we are going to live in an illegal house, I’m not going to add insult to injury by also installing an illegal drain field. While there are now several alternatives to conventional plumbing, we had the option of outhouse. So, yes indeed. We dug a large hole, built a little house over that hole, and all my years of camping experience paid off. We had now, however, become full on oddities among our family and friends.

Sometimes things  don’t make sense, can’t or won’t make sense to anyone who lives outside of my shoes. I grew up in a conventional 1960’s rambler, on 5 acres just outside a small town on the edge of Seattle. I had fallen in love with the Third World, the idea of living simply, and with a man who wasn’t afraid. Sitting on the little porch of my tiny house, listening to the wind in the treetops, watching as the clouds which blanketed the valley far below wandered by, slightly cold, a little clammy, sliding past me, my only company; I can’t say it even made sense to me. I knew I was connected though; connected to those clouds, to the structure which held me, to the rich forest loam on which I walked. There was no hurry, no plan, just this place all around me. It was enough. 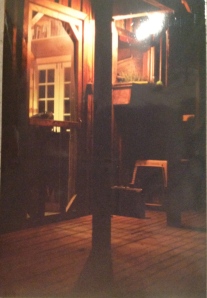 One thought on “Outside the Box?”